Over a hundred ethnic groups are represented in the four million strong population of Bashkortostan. This constituent republic is a mosaic of ethnic, religious, linguistic and cultural communities, unprecedented even for Russia.

Islam and Christianity are the most widespread religions in Bashkortostan. There are nine major centres of worship in the republic. Its 1,445 religious communities belong to 22 faiths. Over 900 mosques, 200 Orthodox churches and 60 parishes of other Christian denominations are open there. Ufa is home to two Jewish communities, one established in 1993 and the other in 2000.

Islam and Christianity account for over 89 percent of all religious organisations in the republic, with Muslim communities making up 67 percent of the total, Orthodox Christian 22 percent, and Protestant 11 percent.

The main Bashkir Muslim house of prayer, the Lala Tulpan, was built in 1989. A jami (congregational mosque) with an affiliated madrasah, it is an architectural masterpiece blending symbolism with beauty: the central building is shaped as an open tulip and the minarets as tulip buds. The tulip is the ancient emblem of the Turkic peoples, and there is a folk belief that tulip buds hold luck inside. 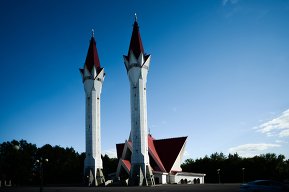 Prior to SCO and BRICS summits in Ufa. Religions of Bashkortostan