Industry, trade, construction and agriculture account for over two-thirds of the gross regional product (GRP) of Bashkortostan, a republic in the south Urals. It ranks ninth in the group of top 10 Russian regions by GRP.

Well-developed industrial sectors include oil refining, chemical production, power generation, mechanical engineering and raw materials production. Together they provide 40 percent of GRP, over 60 percent of the tax revenue and 25 percent of the jobs.

Oil producer Bashneft is one of the largest industrial companies in Ufa. In 2014, it was the sixth largest oil company in Russia by production volume and the fourth largest in terms of primary refining.

Bashkortostan has one of Russia's 20 best energy systems in terms of electricity generation.

The republic is second in Russia in synthetic rubber production and third in caustic soda. It exports over 120 chemical products. Bashkortostan companies mine and enrich copper and zinc ores and also produce precious metals.

Bashkortostan is seventh in Russia for agricultural production. It has highly competitive meat and dairy, poultry and horse-breeding industries and bee farming. Bashkir honey is very popular in Russia. 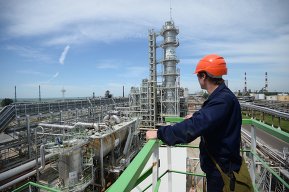 Prior to SCO and BRICS summits in Ufa. Agro-industrial complex in Bashkortostan