Ufa has hosted the IBU Summer Biathlon World Championships, the World Junior Hockey Tournament and the International Children's Games that are supported by the International Olympic Committee. Bashkortostan athletes, the members of Russian national teams, compete in Olympic Games and other events. Notably, they have competed during the 2013 Universiade (World University Games) in Kazan.

The Salavat Yulayev ice hockey club, one of the best Russian and European hockey teams, is based in the republic. The team has won the Russian Ice Hockey Championship twice, the Gagarin Cup and the Kontinental League Cup. 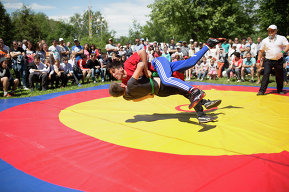 Prior to SCO and BRICS summits in Ufa. Sport in Bashkortostan