On 22 June 2015, the Central Bank of Russia issued 3-rouble commemorative silver coins for the July SCO and BRICS summits in Ufa.

"These coins will be on sale at several commercial banks, primarily at Sberbank, in a few days," Andrei Samorodov of the Central Bank's press service said.

The coin entitled "A Meeting of the BRICS Heads of State in Ufa" will be 39 mm in diameter. The obverse (front) side will show the coin's nominal value, the date of issuance and the embossed national emblem of the Russian Federation. The reverse side will show an official colour logo of Russia's BRICS Presidency and below it, a stylised seven-petal Kurai flower, which is part of Bashkortostan's national emblem and flag. 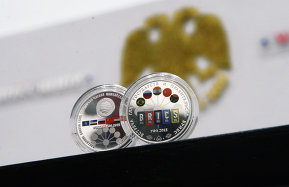